Evgeny Lepekhin wrote an anti-thread on how to ruin your life:

How to suck at anything (anti-thread):

I added my two pennies worth to the wisdom:

If I’m honest, these are the mistakes I myself have been making for the most of my life. Don’t think my life’s already ruined, though: at least, I can see them. 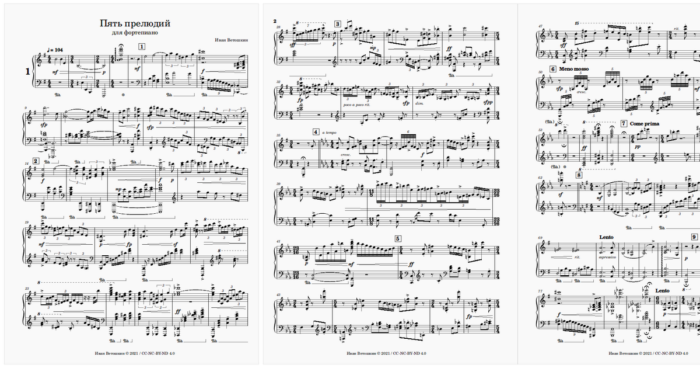 I have composed five preludes for piano:

Composing them was a way of getting away from a complex project of an indefinite period: this second-order uncertainty (when not only do you not know what the future holds, but also how far are you from the desired resolution) was eating my insides, and I needed something to get distracted by. I couldn’t work productively; I couldn’t do anything demanding or implying any sort of responsibility.

Composing music came as a perfect solution. I used to be taught that as a kid by Tatiana Chudova, the prof. of the Moscow Conservatory (although she taught rather avant-garde, atonal composing than tonal, but still), and the experience seemed just enough to allow myself to try again.

These preludes are undoubtedly worse than they would be if supervised by an experienced composer, but I’m glad I tried composing them myself and learned a lot in the process.

I present them as a set, but there’s nothing really binding them together except the time of creating—summer and fall of 2021. Nevertheless, each of them has something I was proud of myself I came up with:

One of my goals was to write something that I, presumably, could play. I’ve never learnt these preludes (this is the reason why I posted MIDI), but have checked them for theoretical playability. If you play piano and would like to play them—I’d be glad to hear; please email me if that’s the case.

Here is the sheet music in PDF format (13 pages, 350 KB) and the set on MuseScore. The videos and sheet music are distributed under CC-BY-SA-ND. Email me if you’d like to use any of that commercially or make a derivative.

Also, if you spot an error in the sheet music (especially in the accidentals), or some unplayable bars, or just want to leave a reply — do not hesitate to do that in the comments.

One day I may post a live performance, if I have a lot of spare time to learn and record it.

It turns out YouTube has a hidden feature that allows one to subscribe to a channel via RSS. I can understand why it has to be hidden — it's too easy a way for a user to avoid ever seeing YouTube’s algorithmic feed. However, it hasn't completely gone away (as, e.g., a way to export subscriptions has), so let’s make use of it.

Give your RSS reader this link:

Sometimes if you come to a channel you will see something completely readable in the address bar instead. Then, to get an ID, you need to click a video and then go back to channel following the link above its description.

Consume content online via RSS — it's far more pleasant than to do so via algorithmic feeds.

Maybe I'm an old lamer but I really don't see. What's so cool in Instagram Stories?

END_OF_DOCUMENT_TOKEN_TO_BE_REPLACED

There's a huge problem about almost every task or notes manager I've ever seen—the most important one, the root of all other ones like being slow, designed badly, or hard to get used to.

They can do too many things.

Say, I need a note-keeping app. The basic set of things I want to do is: open the app, type in some text, hit OK, have my text saved, close the app. I want to note something else, I repeat. Then I open it on another device, read, if unneeded, delete. That's it. Nothing more.

But no! Developers have done everything to make it highly likely that I'd be doing keeping notes but not what I need to keep notes for. I can tag my notes. I can sort them by creating date, date last edited or, certainly, alphabetically. I can make lists out of notes and notebooks out of lists. I can shove images, audio or, for some reason, embed a video from YouTube (not just include a link). I can write my notes in fifteen different fonts or format them with Markdown (or both). I can publish them with a single tap, protect with a passcode or send to a friend who use the app as well. Or, if my friend doesn't know (yet) about how great it is and how much use he can make of it, I can generate a link giving him 10% discount for the first month of use. No doubt, I can do eggs with it, the only reason I can't is I haven't found the doing-eggs button yet.

END_OF_DOCUMENT_TOKEN_TO_BE_REPLACED

The following text will be sent to me: